The White-naped Crane is a threatened species (VU) with about 7,000 individuals remaining in the wild. The species is only found in East Asia, and primarily nest in wetlands of the grassland steppe and forest steppe zones in northeast Mongolia, southeastern Russia, and northeast China. The cranes in the western part of the range breed mostly in Mongolia and migrate to Poyang Lake in the Yangtze Basin of southern China, which is the only wintering area for the species in China.

The western population of White-naped crane is experiencing a rapid and on-going population decline, from about 3,000 individuals 15 years ago to 1,000-1,500 today. Causes of decline relate to human activities and natural causes. The loss of wetlands and habitat degradation to agricultural land expansion, changes in land use practice, and impacts from hydroelectric dams both at wintering and breeding grounds are the most significant threats. Because of their migratory behavior and unique locations of their breeding and wintering grounds, they are extremely vulnerable to various threats throughout their flyways, which lie along one of the most rapidly changing human developed regions on Earth – East China. 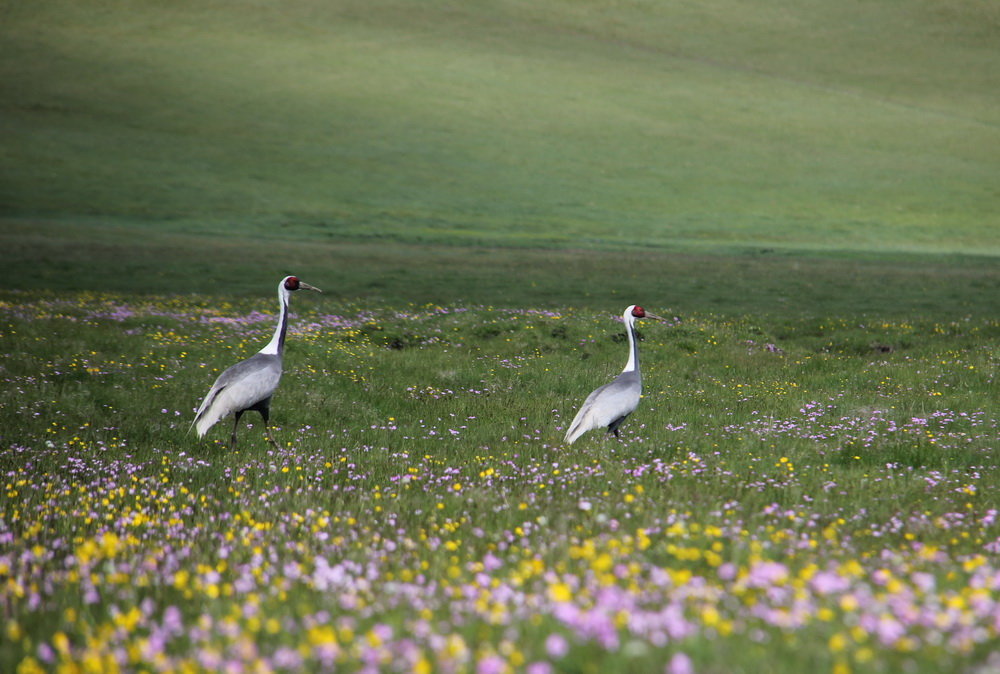 There are six species of cranes native to Mongolia. Especially, Mongolia is an important country for the white-naped cranes and more than half of the global population breeds in northeastern Mongolia. Therefore, it is important to monitor crane populations in this country and engage public in conservation. Although cranes are protected by tradition in Mongolia, there are many challenges for the survival of cranes, in particular the wetland-dependent, White-naped Crane.

In 1991, Dr. Tseveenmyadag Natsagdorj with another famous ornithologist Dr. Bold Ayurzana were the first Mongolian biologists to visit the International Crane Foundation. At that time, Mongolia was just opened up to western society and such visit was regarded as extremely unusual. Nevertheless, it laid the foundation for future crane conservation work in Mongolia.

In summer of 2012, a group of crane experts and conservationists from North America and Europe visited the northeast of country to help Mongolian biologists to carry out field surveys and public awareness activities on white-naped cranes. The visit was organized with the support from International Crane Foundation led by the co-founder Dr. George Archibald. This trip co-led by Mongolian foremost ornithologist Dr. Tseveenmyadag Natsagdorj and Dr. Nyambayar Batbayar was the beginning of a current project for the conservation of White-naped cranes in Mongolia.

Our current project aims to strengthen conservation of White-naped Cranes and their wetland habitats through building the research capacity of the Mongolian team to carry out long term population monitoring, determine migratory flyways and critical stopover and wintering sites through satellite telemetry, assess impacts of livestock grazing on wetland and permafrost, develop a better livestock management on critical habitats, engage local herding and agricultural communities in crane and wetland conservation, and secure the protection of the most important white-naped crane breeding site the Khurkh and Khuiten River Valleys.

The project is primarily focused on Khurkh and Khuiten River Valleys, because it has the highest nesting density of white-naped cranes in East Asia. After several years of our project activities, the site has been designated as a Nature Reserve by the Mongolian Government. Prior to this elevated protection status, the site had received important international recognitions such as Ramsar Site, North East Asia Crane Network Site, North East Asia Anatidae Network Site, Important Bird Area, and EAAFP Network Site.