Of the 70 IBAs in Mongolia, 23 are fully included within Special Protected Areas (i.e. national-level protected areas), six are partly included and 41 are currently unprotected. Many of the unprotected IBAs would benefit from official designation as conservation areas, either as Special Protected Areas under national legislation, as local protected areas by the relevant aimag or as Ramsar Sites under the Convention on Wetlands of International Importance, to which Mongolia is a signatory.

Mongolia has a small but increasing number of ornithologists and birdwatchers. In many places, birds and other biodiversity have not yet been surveyed. It is anticipated that future field surveys will identify more sites that qualify as IBAs, especially in forest, grassland and desert habitats, and that the boundaries of some existing IBAs will be refined to reflect new information on the distribution of bird populations.

It is also important to stress that Mongolia’s steppe, desert and taiga habitats are extensive and largely intact, and that the populations of key species they support are usually dispersed. As a result, only a small proportion of these important habitats has been included within IBAs so far, because of the difficulty of delineating sites. Only the best-known and most representative sites have been identified as IBAs. While these IBAs should form a focus for conservation efforts for these habitats, these will have to be complemented by landscape-level conservation actions, covering a much larger area, if the wildlife values of these habitats are to be maintained. Although the IBAs that have been identified in these habitats are considered to be of particular importance, it would be incorrect to infer that land lying outside of their boundaries is unimportant for biodiversity. Indeed, the integrity of the IBAs identified can only be maintained if they are conserved as part of a wider landscape approach to habitat management and conservation.

With the above provisos, the 70 IBAs identified are an excellent first cut of important areas of natural habitat in Mongolia, which can be used with confidence, right away, to guide site safeguard and conservation planning and action.

There is increasing pressure on IBAs in the steppe zone as a result of increasing livestock populations and overgrazing. This is resulting in the degradation and desertification of grasslands. Steppe IBAs are also adversely affected by fires, which are set in spring and early summer to promote grass growth for grazing and which can be destructive to nesting birds. Overgrazing and trampling by livestock is of particular concern at a number of wetland IBAs in the steppe region.

A further problem at some sites in recent years has been the use of rodenticides to control vole outbreaks, which has resulted in the poisoning of birds of prey and sometimes other important species, such as cranes. The water levels of many steppe lakes have fallen in recent decades, with some wetlands completely disappearing. In some cases this is due to the damming or diversion of rivers and streams, and use or water for irrigation and livestock. In other locations the cause

Mining, infrastructure development and tourism development are all undergoing rapid expansion and these pose a risk to Mongolia’s IBAs if their environmental impacts are not anticipated and managed. On-going mining operations are currently affecting only a small number of IBAs. However, mining exploration licenses overlap with many more IBAs. Moreover, mineral exploration and extraction can threaten the biodiversity values of IBAs, even when there is not direct overlap, due to indirect impacts such as water pollution, overburden and tailings disposal, and infrastructure development.

There is also increasing concern about the potential impacts on IBAs of infrastructure, including road and rail networks, hydropower development, and power transmission lines, much of which is associated with mining development. Tourism is also of increasing concern. It is already resulting in disturbance and localised pollution at some sites, particularly certain wetland IBAs with important breeding colonies of globally threatened waterbirds.

Illegal hunting can have a devastating impact at IBAs, with some species being particularly vulnerable. Dalmatian Pelican is very close to extinction in Mongolia as a result of hunting, and Great Bustard populations are highly vulnerable and continue to be targeted. A comparatively recent development is the very high pressure on Saker Falcon Falco cherrug, which is highly sought after for the Arab falconry trade. 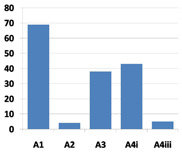 This chart shows the number of IBAs meeting each criterion (A1, A2, A3, A4i and A4iii). 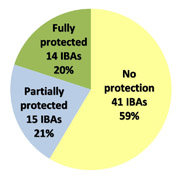 Only 14 IBAs are fully protected within Mongolia's national protected area system, 15 are partially protected, while 41 are currently unprotected. 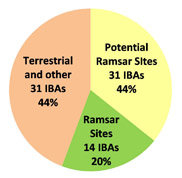