Home Our work Key biodiversity areas What are IBA?

Important Bird Areas (IBAs) are internationally important areas for the conservation of birds and other biodiversity. They are identified using objective, internationally accepted criteria, and are used to guide conservation planning, action and sustainable development. As well as their importance for biodiversity, IBAs provide a range of ecosystem goods and services important to human communities, and provide a focus for birdwatching, wildlife photography and other recreational activities.

How are IBAs chosen?

A site is recognised as an IBA only if it meets certain criteria, based on the occurrence of key bird species that are threatened with global extinction or whose populations are otherwise irreplaceable. An IBA must be a discrete site that is amenable to conservation action and management. The IBA criteria are internationally agreed, standardised, quantitative and scientifically defensible. Ideally, each IBA should be large enough to support self-sustaining populations of as many as possible of the key bird species for which it was identified or, in the case of migrants, fulfil their requirements for the duration of their presence. By definition, an IBA is an internationally agreed priority for conservation action.

Criterion A2 - Restricted-range species: Sites qualify as IBAs under this criterion if they are known or thought to hold a significant component of the group of species whose breeding distributions define an Endemic Bird Area (EBA) or Secondary Area (SA). EBAs are defined as places to which the breeding ranges of two or more restricted-range bird species are entirely confined, while SAs are defined as places that support one or more restricted-range bird species. Restricted-range specis are species with a global breeding range less than 50,000 sq km. There are no EBAs in Mongolia but there is one SA, Mongolian Mountains, which is defined for Mongolian AccentorPrunella koslowi.

Criterion A3 - Biome-restricted assemblages: Sites that qualify as IBAs under this criterion are known or thought to hold a significant component of the group of species whose distributions are largely or wholly confined to one biome. A biome is defined as a major regional ecological community characterized by distinctive animal and plant species. Mongolia includes parts of five biomes: boreal forest; Eurasian steppe and desert; North-east Asian temperate forest; Eurasian high montane (alpine and Tibetan); and Sino-Himalayan temperate forest.

What about other wildlife?

Birds have been shown to be effective indicators of biodiversity in other animal groups and plants – especially when used to define a set of sites for conservation. So, although Mongolia's IBA network is defined by its bird fauna, the conservation of these sites would ensure the survival of a correspondingly large number of other animals and plants. As the emphasis moves from site identification to site monitoring and protection, conservation of IBAs will make a major contribution to conservation of overall biodiversity. IBAs are not the only way of conserving birds and other biodiversity, however. They form part of a wider, integrated approach to conservation and sustainable use that also focuses on species, habitats and people.

How were Mongolia's IBAs identified?

The identification of IBAs in Mongolia was a collaborative effort, involving many organisations and individuals. The list of Mongolian IBAs was finalised at a workshop entitled "Towards the Identification and Safeguarding of Important Areas of Natural Habitat in Mongolia", held in Ulaanbaatar on 19 and 20 April 2007.

The inventory of Mongolian IBAs presented in these webpages was prepared under the World Bank-funded activity Strengthening the Safeguard of Important Areas of Natural Habitat in North-East Asia, which was implemented by the Wildlife Science and Conservation Center (WSCC), BirdLife International and the Institute of Biology of the Mongolian Academy of Sciences, in collaboration with the Ministry of Nature and Environment (MNE), and with support from WWF Mongolia, WCS Mongolia Program, and the National University of Mongolia.

MN014 - Khar Us Lake is one of very few sites to support the critically endangered east Asian population of Dalmatian Pelican Pelecanus crispus.

MN058 - Valleys of Khurkh-Khuiten Rivers: Every year thousands of cranes congregate at this IBA before they start the long journey to their wintering areas.

MN028 - Orog Lake: Lakes in desert steppe areas are important for a number of migrating waterbird species, such as Common Shelduck Tadorna tadorna. 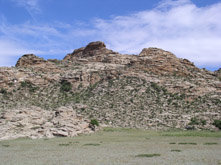