Young falcons are particularly susceptible to electrocution. Also the sex of electrocuted adult Sakers suggests a possible male-biased sex ratio among adult Saker Falcons in Mongolia. Consequently, the electrocution threatens the long term survival of the species in one of its last remaining strongholds.

The Saker Falcon is a species of significant conservation and cultural importance that has undergone rapid recent declines, with most of the remaining global population residing on the Mongolian and Qinghai-Tibetan Plateaus of Central Asia. Yet even in these vast and remote refuges, Saker Falcons face a serious and growing threat of electrocution at electricity distribution lines. The power pole designs currently favoured across the region are extremely dangerous for birds of prey, because the concrete poles and galvanized steel hardware, which are electricity conductors, pose a high electrocution risk through grounding if a perched bird happens to touch a live cable. 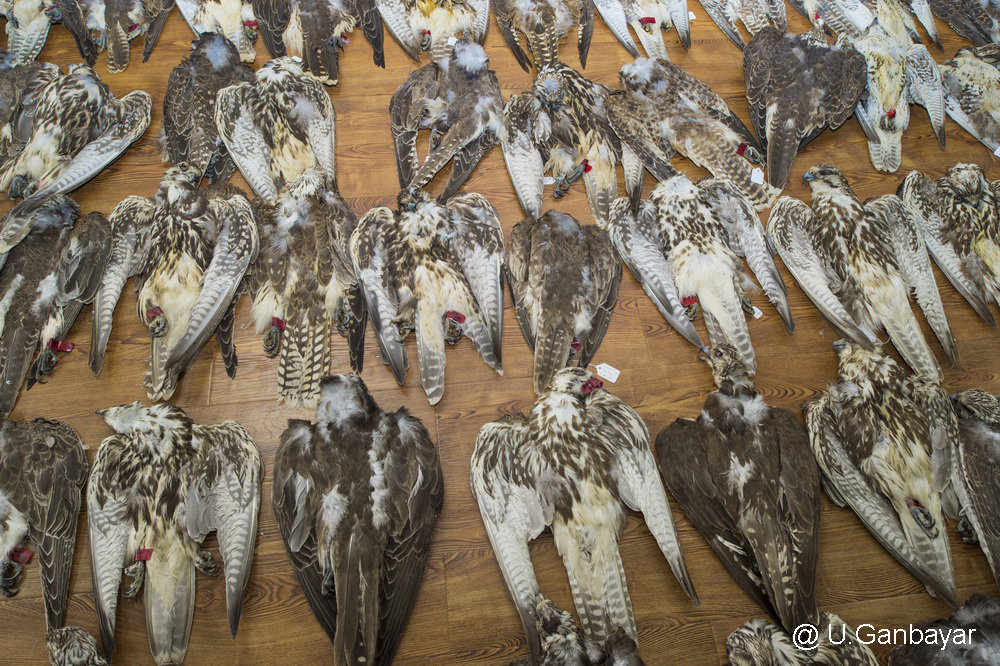 A paper in the Journal of Raptor Research reports the results of long-term and widespread surveys undertaken by Mongolian researchers under a project co-ordinated by the Emirates Falconers’ Club, Abu Dhabi. Research conducted in the Mongolian steppes show that the electrocution problem is widespread and persistent, where some power lines can kill enormous numbers of falcons, with 490 Saker Falcons recorded electrocuted at one 56 km line in a single year. Daily monitoring for carcasses indicated that electrocution rates were highest in late summer when juvenile birds disperse from their natal areas and congregate in areas with high densities of their colonial rodent prey. In the featureless open landscapes of the Mongolian steppe, power poles are attractive perch sites for young falcons. Electrocution rates are highest where these dangerous power lines cross prey rich grasslands.

The researchers found that the nomadic post-fledging dispersal movements of young Saker Falcons and their use of temporary settlement areas in places with high prey abundance, meant that this age class was particularly susceptible to electrocution, comprising 90% of Saker Falcons electrocuted in the post-breeding period. Intriguingly, at some power lines and in some years, young females were significantly more likely to be electrocuted than males. The researchers suggest that this likely reflects the demographic composition of the local population in the vicinity of the line, possibly as a consequence of intraspecific competition between the sexes. With evidence to indicate that more males survive to adulthood than females, it appears that electrocution has the potential to influence the demographic structure of the Saker Falcon population on the Mongolian Plateau, which in turn can threaten the long term survival of the species in one of its last remaining strongholds.

Link to the paper: Variation in electrocution rate and demographic composition of Saker falcons electrocuted at power lines in Mongolia

Share
Related
News
Bats in the steppe may need more water Bat conservation is at a very early stage in Mongolia due to a lack of capacity, the necessary basic ecological knowledge, and limited awareness of bats. Our initial fieldwork convinced us that the bats of the steppes habitat require particular attention in Mongolia because increasingly frequent droughts and the looming specter of global warming could have a devastating impact.
News
Electrocution on medium voltage powerlines Thousands of birds of prey including the iconic saker falcons are electrocuted across Mongolia on powerlines. Researchers fight to stop the killing and find solution
News
Mongolia hosts a meeting of crane experts from East Asia All six countries in North East Asia gathered together in Mongolia to finalize white-naped crane conservation strategy.